A Grain-Free Way to Weight Loss in Pets

A Success Story In Progress

Meet Ashley. Ashley is a 4 year old beagle who came to our family from a beagle rescue organization. When she came to us she was dangerously underweight weighing 16 pounds, and was afraid of her shadow and any and all other things that go bump in the night. But Ashley also had eyes that could speak to you and a face that could melt the coldest heart. So she became an immediate full-fledged member of the family.

Beagles, by nature, tend to be driven by their nose and are known to have voracious appetites. Add to that the fact that Ashley lived her formative years fighting for every scrap of food she could get. For Ashley, when food became available, she (and admittedly, her new family) had a hard time controlling her appetite.In less than a year Ashley ballooned to 42 pounds.!

Three months ago, I joined Only Natural Pet . We knew Ashley was overweight – having unsuccessfully tried prescription meds to control her hunger – but when I brought her to the office, she really stood out from all the svelte, athletic “Boulderite” dogs that hang out in our Boulder, Colorado facility. Marty Grosjean, president of ONPS and pet lover extraordinaire, offered a challenge - feed Ashley our Only Natural Pet EasyRaw (strictly according to directions for her weight), reduce the morning, afternoon and evening treats, increase her exercise and see if her weight didn’t fall back into line.! 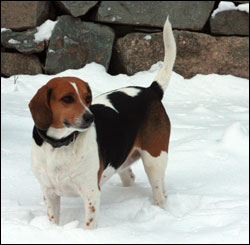 Almost immediately we noticed Ashley was friskier. Soon, we also noticed her waistline was actually beginning to appear! Ashley has shed 6 pounds, has more energy than ever and seems to be all around happier and healthier. Our goal is to have Ash down to 32 pounds by spring. More photos and our progress will be shared in upcoming articles.! 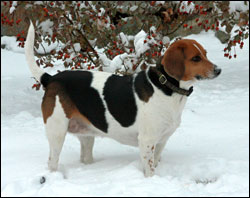 Choosing the Right Brush for Your Dog The Role of Protein in Pet Food A Short Guide to Chinese Herbal Medicine for Dogs & Cats